Every week on our Best Bib and Tucker Facebook page we present a Trivia Thursday post with odd, unusual, and interesting facts.  Thought we’d share this week’s findings on the blog for our non-Facebook followers to enjoy! It’s all about pants and the other words we have used for them over time. 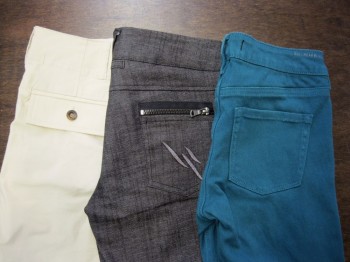 The word PANTS is shortened from the English “pantaloons”. It is currently the most commonly used word for “leg coverings” in American English. If used in Britain you would be referring to underwear :).

PANTALOONS finds it’s roots in panteleon a name given to the fool character in comic productions who would wear puffy pants that were fitted below the knee.

The word TROUSER is from the Irish “trius” which is a tartan pant that the Scots wore in place of kilts during cold weather. It is still the most common word for pants in Great Britain.

The word SLACKS is an American word for pants most likely from the definition of slack meaning loose or unhurried. It typically refers to a casual pant and is not typically used by those under 50. In a 2012 it was voted the English word that should be eliminated from the language by New Yorker Magazine’s social media followers! Their first choice was “moist”, but editors deemed that too important to the cake industry 😉

Feel free to consider yourself an official “smarty pants”. Head over to our facebook page and weigh in on what you call them. Happy Thursday!